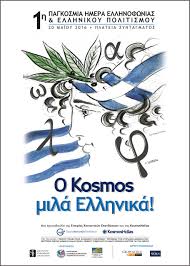 On May 20 and at 20.00 pm at Plaza Hotel a day conference is held, in which  Mr Karkanias is giving a speech about “the economic dimension of the promotion of the greek language”. The conference is taking place on this specific date, since it has been proposed to the Parliament to establish by law May the 20 as the Day of the Greek Language and Culture.

The Day Conference is organised by the Company of Social Investments, under the aegis of the General Secretariat of Expatriate Greeks, of the Embassy of Cyprus, of the Central Union of Municipalities in Greece and of the National Council of Associations in Greece for UNESCO, with the aid of the Institution of Social Economy, of the Organization for the Promotion of Greek Language and the co- operation of the Greek Federation Communities and Fraternities in Italy.

A unique experience in Minoan’s World!