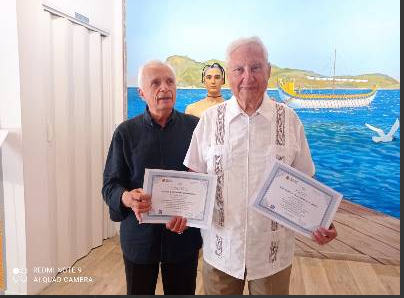 I would not believe that we would have students so advanced in age up to recent April when John came to our school at Chania.

The oldest student we had before him as far as I remember was a Swiss lady in her 80s but we have not been keeping statistics about the age of students up to now.

We had corresponded with John on the internet and also through the normal Post  during a lot of months before he came but we had not understood how old he was up to the time he arrived at Chania.

He has been a very good student , he has improved his Greek and on top of this he learned to dance zeimpekiko.

John is a second generation Greek American , whose father, from a small village on the Etolian mountains, traveled to USA at the beginning of previous century.

I went to Chania some days ago to give him a special prize titled per a quotqtion attributed to Solon the Athenian ( I GROW OLD WHILE LEARNING A LOT)and I had the opportunity to speak with him about his so long life.

Based on all this experience we decided to launch a new project for Greeks out of Greece who are older than 80 .

200 years since the Revolution

A visit to Benaki Museum