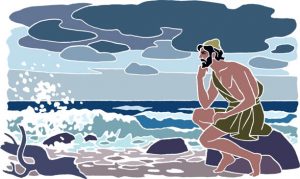 As promised two weeks ago, we present the Odysseys of some of our students. We started last week with a Greek-German we continue now with a German lady.

A student of ours from Germany describes her own “Odyssey”, which lasted 27 years.

“I was born, lived and studied in East Germany.

In 1989 I escaped from East Germany with my 8-month daughter; it was a far and scary trip. After four days with the help of a border guard I went illegally to Austria, where I was hosted for one week. I intended to go to West Germany.

I traveled and went to Hamburg. There I stayed in a camping for three months. Then I went to a smaller city, where I found a job as a waitress. I worked there for three years and then I went to Rotenburg, where I lived for ten years.

Then I decided to leave Germany and moved to Finland, where I worked as a manager at a kindergarden for five years. However, I wanted again to change my life and I found a new job as a saleswoman at a shop on a ship, where I stayed for three years.

Later I returned to Berlin, as the company sold its ships. In Berlin I worked as a psychotherapist until 2015, when I married a Greek and we moved to Patra, where we live until today.

Today, it seems so unbelievable to me, that the last 30 years I moved across five countries and did so many different jobs.

I must say though, that this adventurous trip filled me with knowledge and experiences, something that reminds me of the first verses of Homer’s Odyssey and the “Ithaka” ’s verses of Kavafisl.

I was never afraid to change my life and my environment, besides I became this way more wise and experienced. Now I feel that I reached my own “Ithaka”, besides the true island of Ithaka is very near to Patra.

ΑΤ THE “FISHERMAN TAVERN” WITH THE STUDENTS