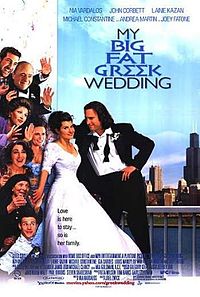 During my typical presentation on the history of Greek Language, I was discussing with my students and I mentioned that Greeks are very interested in their language. We say often that the Greek language is the oldest language that is spoken from the same people at the same place (along with the Chinese), that many Greek words exist in other languages etc. However, we are exaggerating very often! Our student, Hans from Switzerland remembered the movie «ΓΑΜΟΣ ΑΛΑ ΕΛΛΗΝΙΚΑ» (“MY BIG FAT GREEK WEDDING”) and the father of the bride claiming that the Japanese word «kimono» originates from the Greek word «χειμώνας» (winter), which is wrong. However, his other statement that the word «arachnophobia» has Greek origins was correct. You may find the amusing scene of the movie on YouTube ( https://www.youtube.com/watch?v=VL9whwwTK6I ).