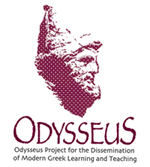 The meeting of “ODYSSEUS PROJECT FOR THE DISSEMINATION OF MODERN GREEK LEARNING AND TEACHING – Lifelong Learning Programme – KA 4 Dissemination and Exploitation of Results – Project no 135779-LLP-2007-ES-KA4MP” took place in our School on Monday 23th and Tuesday 24th of March 2009.

“ODYSSEUS” consists of a Program, financed by the European Union, with a primary aim: the promotion and dissemination of Greek Language. Its aim is accomplished through language courses to Immigrants, Students and others of advanced at least level. Teaching is mainly supported by the educational materials “Travel in Greece III”, “Business Greek” and “Scientific Greek”, developed in the framework of other European Programs.

Apart from our School, in this meeting participated the Coordinators of the Program of University of Murcia (Spain), representatives of “Agenzia per il Patrimonio Culturale Euromediterraneo” andUniversity of Lecce (Italy) as well as ECED (Educational Organism of Bulgaria). We discussed basic issues concerning the Program, details regarding the language courses and the Final Congress in Murcia, as well as a potential seminar of Greek language in Crete during summertime.